A new report by The Local Data Company (LDC) reveals that the number of new food and beverage (F&B) outlets opening across Great Britain has reached a new peak in the last 12 months. 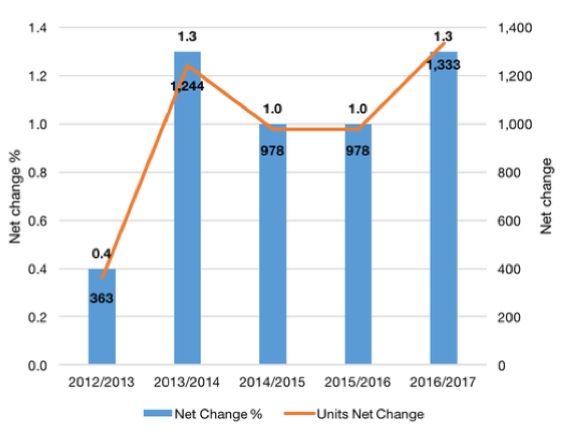 Changes by type of F&B outlet

Independent Vegan restaurants have experienced significant growth and have more than doubled in number from 8 to 17 in the past 12 months. Other cuisines to enjoy a boost are Jamaican (+11), Middle Eastern (+29), Carribean (+35), Turkish (+59) and American (+73).

Changes by Multiple/Independent by region

There are significant differences in net growth in independent and multiple (stores with more than 5 units nationally) leisure units when regions across GB are compared. Whilst Greater London (+138), the North West (+146) and the West Midlands (+117) all attracted the highest increases in independent leisure units, the number of new multiples was on the whole much lower with +494 new multiple units in total across GB compared to +839 independent.

“The growth of food and beverage outlets across Great Britain have been consistent and strong. For many high streets, shopping centres and retail parks it is now an essential part of their offer where one in ten units would have been typical to see, to now one in four or even three being the norm across all locations.

The significant growth of F&B outlets across the country has been driven by changing consumer habits towards food on the go, eating out and a very active investment market in operators driven primarily by Private Equity finance.

The big question is can this expansion continue? I would say NO and I believe that we will see a slowdown in 2017 in the expansion of outlets. 2016 and the last 12 months have also seen a number of distressed operators as a result of fierce competition, significant increases in costs and new market forces such as food delivery where the whole business model in some cases is being seriously challenged.

The current uncertainty across the country around inflation, interest rates and Brexit means that many more operators’ margins will be squeezed so hard that they will have to close. This will be very location specific, as the report data illustrates the significant variances that exist up and down the country in terms of economic consumer health and density of F&B outlets.”

What impact do Christmas markets really have on footfall?

Christmas is once again a distant memory - we’ve taken down our trees, put away the decorations and Britain’s festive market stalls have closed until ...