Heightened restructuring activity has seen the half-year net reduction in stores on Britain’s high streets hit record levels according to research by the Local Data Company  and PwC.

On a sector by sector basis, only 15 out of 96 sectors showed a net growth in store numbers, and all but two grew by only a single digit number of outlets: takeaways with a net increase of 26 outlets, and sport and health clubs with a net increase of 17. Meanwhile, the biggest net declines were seen amongst fashion retailers (-118), restaurants (-103), estate agents (-100) and pubs (-96). 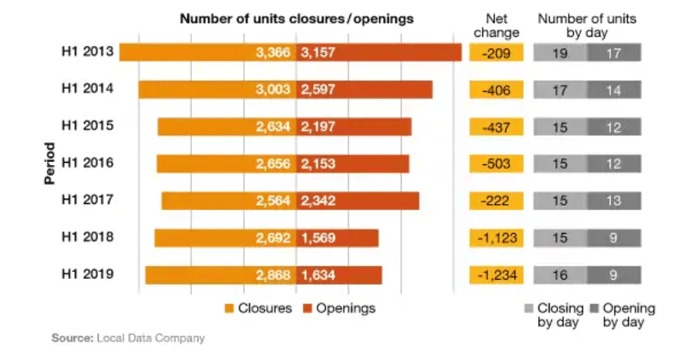 “The record net decline in store numbers in the first half of 2019 shows that there’s been no let-up in the changing ways that people shop and the cost pressures affecting high street operators.

“While retailers need to keep investing to make sure their stores and propositions are relevant to today’s consumers, it’s also critical that all stakeholders find ways to ease the burden on operators, keep investing in the high street, and encourage new and different types of operators to fill vacant space.

“The good news is that there are green shoots, as  new entrants are entering even embattled sectors such as fashion.  Our research tells us that consumers still want to spend their money in well located and invested stores and leisure venues on the high street.

“However, as consumers continue to change the way they shop and spend their leisure time, the reality is that we may need fewer high streets in the future. This opens up opportunities to repurpose high street space for other uses, while the remaining space evolves to meet consumer demand for convenience, choice and experience.”

Fashion retail continues to be the hardest hit sector, with 10 stores a week closing, mainly as a result of high profile administrations, alongside CVAs and restructurings -particularly amongst major mid-market chains.

While the decline in many service sectors are  likely to continue, the fact that fashion and restaurant closures have been dominated by one-off administrations and CVAs, suggests that this decline may ease in the coming year.

“A number of high profile business administrations have contributed to the record net decline in high street store numbers, for example in fashion retail and casual dining. Several of these were in turn caused by a culmination of CVAs that reduced rents and store numbers, but did not sufficiently improve the consumer proposition or cost structure of those brands.

“This reinforces our view that any business restructuring needs to happen alongside a wider programme of change. As we approach the key revenue period in the run up to the festive season- often make or break for many retailers-  right-sizing store portfolios and wider cost bases will be crucial.

“But the PwC and LDC research also shows that successful operators are taking advantage of the current turmoil to either open stores that were not economically feasible in the past, or to move stores to better locations or to take advantage of lower rents. And it’s this nimbleness that will set apart winning retailers in years to come.” 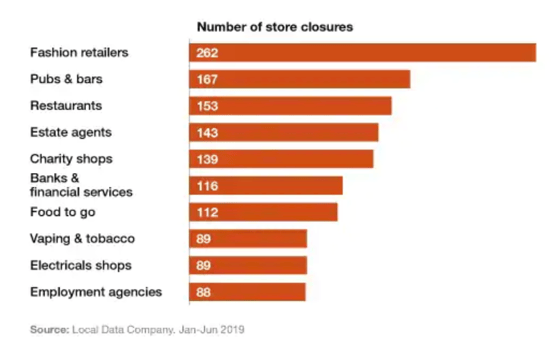 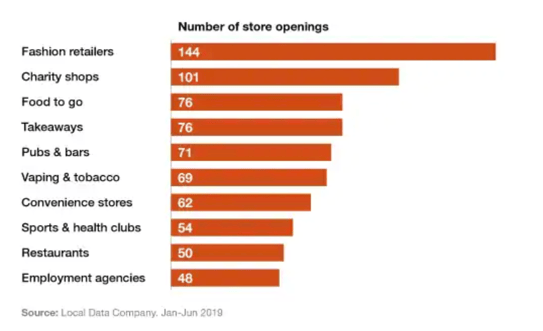 Across the regions and nations 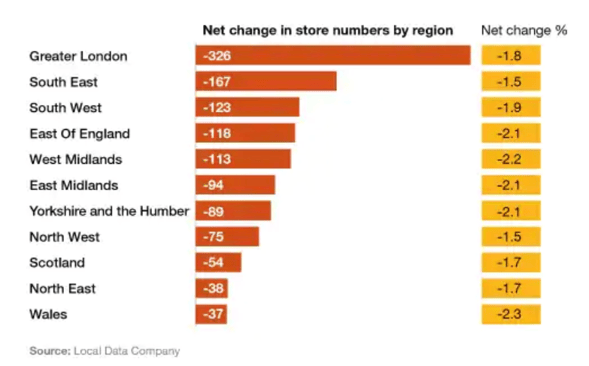 Table 1. Openings and closures of multiple retailers by region across the top 500 GB town centres in 2018

Greater London saw the largest number of net closures across all the regions, although it was right at the national average (-1.8%) when taking into account its overall larger number of units.

The East Midlands, North East, South East and Yorkshire and the Humber were the only regions to see a reduction in their net closures between H1 2018 and H1 2019.

“One of the most striking things about this latest Local Data Company and PWC analysis is the level of market churn identified in such a short space of time. Whilst the overall net change number, a loss of 1,234 occupied units in only six months, is certainly significant, the level of openings and closures activity beneath this is hugely notable as the industry continues to re-set.

In our experience, retailers are being that much more cautious and risk averse as far as both planning for new store openings and in making decisions across their existing property portfolios.

The reality is that UK retail space will continue to look very different over the coming years, and this is demonstrated by the sheer number of stores opening and closing on an ongoing basis.”

Despite the COVID-19 pandemic causing mass closures across the GB retail and leisure landscape, there were still 31,405 openings of independent units ...