“The second quarter rise in the vacancy rate across retail sites was modest, as Government support allowed many locations to survive lockdown. However, the full effects of the pandemic are yet to be seen, with Government slowly withdrawing the relief that substantially reduced costs over the last period. How many stores are left standing will depend on how demand recovers going forward and the recent rise in vacancy rates is just the beginning. Retail Parks continued to fare better than High Streets and Shopping Centres due to their extra space, on-site parking, and broader mix of food and non-food retailers, but this was still not enough to prevent a slight increase in vacancy rate.

“Covid has accelerated many of the changes in retailing already underway. Online continues to grow and retail stores should also have a vital role in our communities, supporting jobs and other businesses which rely on retail footfall. The shuttering of too many shops on our high streets will threaten the vibrancy of town centres, and damage local economies. With many months of rent having built up during lockdown, the Government must ensure local stores are not shouldered with unpayable debts. Without action, there will be unprecedented retail and business failures, job losses and knock on consequences for highly geared property owners.”

Lucy Stainton, Head of Retail and Strategic Partnerships at The Local Data Company

“Since 2018, retail vacancy has risen steadily across GB, in part due to the widely discussed oversupply of retail property given changing consumer demands. Despite seeing an initial jump in vacancy in Q2 2020, it is still too soon to measure the full impact of the pandemic as almost half of the non-essential retail units that were eligible to reopen following the 15th of June were still temporarily closed as of the 1st July.

"Over the coming months, we are forecasting a spike in vacancy as the real fallout of the pandemic is felt. In the first three weeks of Q3 we have already measured a 0.2 percentage point increase, so we can see this will be a sustained trend. Towns which will be hit the hardest will be those with a vacancy rate higher than the GB average pre-COVID-19 and those with a low number of ‘essential’ retailers which would not have been able retain as much footfall during lockdown. This being said, at the same time we are tracking an increase in the amount of retail property which is being redeveloped for other uses, such as office or residential, an example of this being the planned conversion of the House of Fraser store in Westfield into flexible office space. With the relaxation of planning permission announced by the Government, this is another trend we expect to increase long-term and will ultimately temper the increase in vacant units over time.” 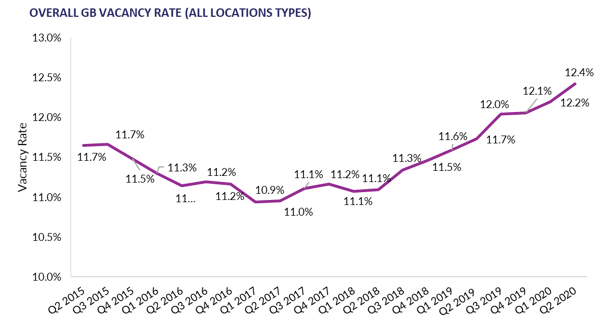 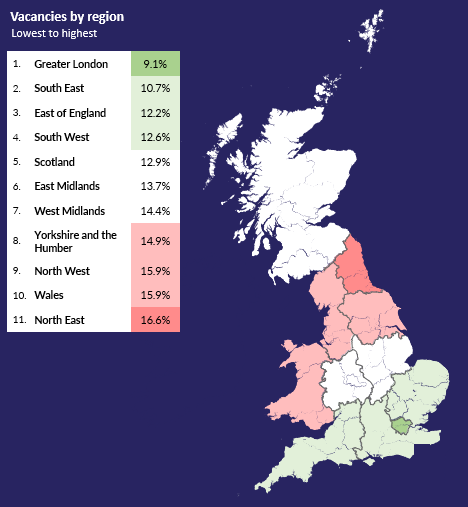