“LDC’s latest figures prove that for better or worse, the structural transformation across the retail sector shows no sign of slowing or abating. In 2018 we tracked the GB vacancy rate increasing by 0.3% to 11.5%, driven predominantly by a decline in retail or service outlets which can be replicated digitally.

However, perhaps the most defining feature of 2018 is the first-time reversal of fortunes in the leisure space, this has largely been driven by a decline in the mid-market casual dining space. The key areas of growth across the last 12 months are very much skewed towards 'lifestyle' brands and offers including health clubs, restaurant / bar concepts, barber shops and beauty salons. This shows how consumers are continuing to be driven by newness and experience, presenting increasing challenges for more legacy operators.

Moving forward we predict the overall size of the physical retail and leisure market will continue to shrink as shown by the acceleration of retail stock changing to other uses such as office or residential space in 2018. However, we are also expecting to see a continued flurry of new entrants to the market across both the retail and leisure spaces, as new businesses seek to capture the consumers’ appetite for originality – albeit potentially to the continued detriment of existing operators who do not tweak and build on their concepts accordingly.”

Vacancy rates and numbers of units

Regional changes to vacancy rates over 5 years and 12 months 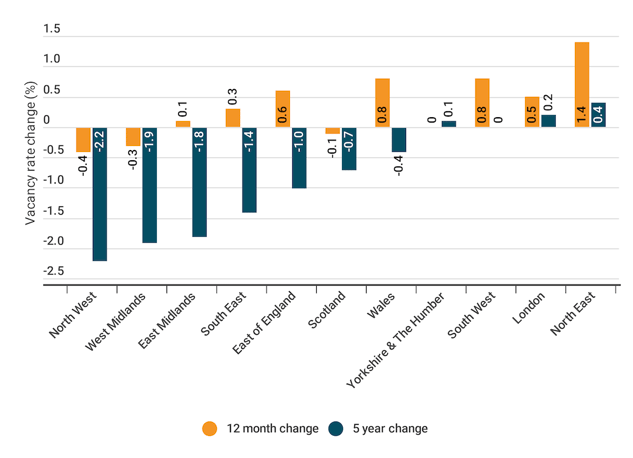 Retail categories which saw decreases in numbers in 2018 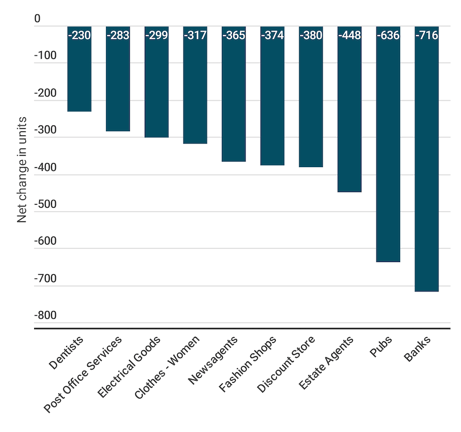