The impact of Valentine's Day on Footfall

Valentine's Day is a key date for most retailers and leisure occupiers. With an estimate of £458.7 million spent on Valentine's Day in the UK this year (according to PwC), this day now rivals retail events such as Black Friday and Cyber Monday.

Chris Fowler, Relationship Manager at LDC, looks at the impact Valentine's Day had on Footfall in Nottingham and Brighton.

Retail centres with a strong Leisure offer saw some of the highest increases in footfall over half term - especially on Valentine’s Day, when cinemas and restaurants proved to be key attractors.

Significant footfall increases were seen in many city centres on February 14th, particularly those with a strong mixed leisure offer such as Nottingham and Brighton. LDC has a network of footfall sensors in each of these cities, which provides rich insight about the relative impact of key events across different zones of the centres, and the role that clusters of occupiers have during these.

Nottingham saw some of the highest week-on-week increases over half-term week (Mon 13th- Sun 19th February), with data from 14 sensors across the city centre showing a 15.8% uplift compared to the previous week. This is in comparison to an 11.6% week-on-week increase at the national level.

Nottingham locations, with a higher representation of Leisure occupiers, saw a significant benefit from the combination of half term and Valentine’s Day:

Brighton also saw large increases in footfall on Valentine’s Day, with the largest relative gains between 2pm-3pm (+27% on the previous Tuesday) and 8pm-11pm (+51%) – a very similar pattern to the one seen in Nottingham.

Footfall volumes on West Street, Brighton (which has a cluster of Leisure occupiers and a cinema) more than doubled, and some parts of East Street saw increases close to 50% on the previous week.

The increases on East Street are interesting from a retail perspective, because the 3 sensors all sit in the windows of major fashion brands. These appear to have benefited from the eclectic mix of independent restaurants and other Leisure occupiers along East Street, attracting more amorous couples than usual. 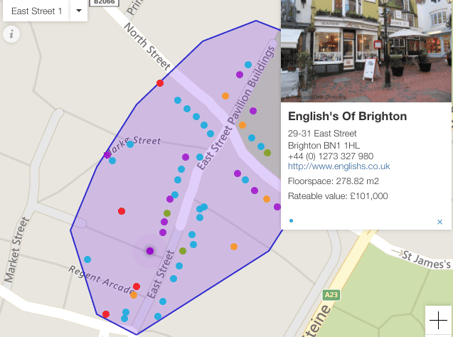 Is there an opportunity for the multiples to extend their opening hours to benefit from this pattern during key events?

Below is a summary of Valentine’s Day footfall, compared to the previous Tuesday, from 18 devices across Brighton. The highest increase was on West Street, near the nightclub and cinema.

One location in Brighton actually saw a decline in footfall on Valentine’s Day. Western Road is dominated by Service occupiers – especially Estate Agents and Auctioneers, and saw a 3% week-on-week drop in footfall on February 14th. This illustrates the need to ensure all key locations are monitored in a city – not just the busiest streets, where any impacts from key events may not be representative of the city as a whole.

LDC’s new mapping dashboard can be used to summarise footfall levels across the city to easily understand the local market dynamics by week, day and hour. Other indicators can be overlaid to visualise the relationship between footfall and persistent vacancy rates, clusters of businesses and recent openings and closures.

The detailed insight this provides demonstrates the value of tracking footfall across the whole city centre (not just the central areas), and help understand how different zones within a city have different levels of appeal during key events. 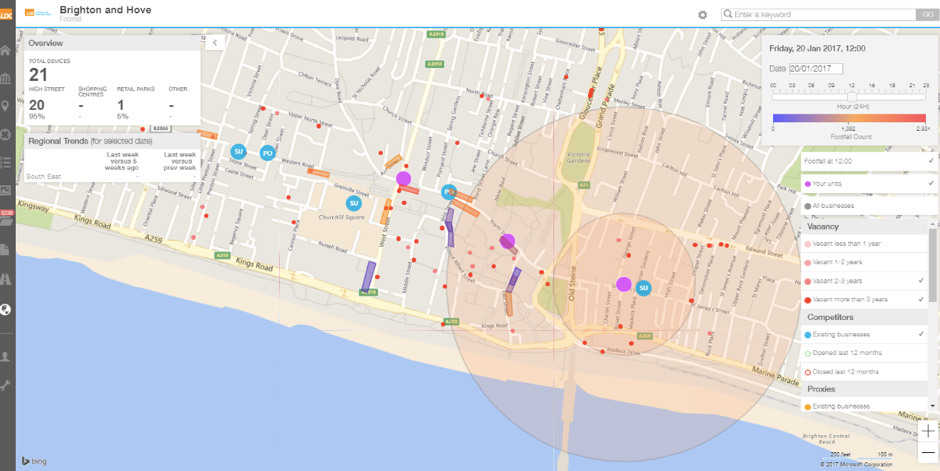 “The information from the Local Data Company is hugely important for us, not just to understand visitor flow around our city, but to enhance our proposition to prospective businesses who are thinking about locating to the city.” - Gavin Stewart, Chief Executive, Brighton Business Improvement District (BID)

To find out more visit our Footfall page. If you have any questions, or would like to speak about measuring footfall in your location, you can email Chris at chris@localdatacompany.com.

LDC currently works with 25 Business Improvement Districts (BIDs) or Councils that have a focus on understanding dynamics within their town centres. ...

Data: What’s next on the menu? - How to use footfall to identify and leverage new opportunities

The increasing cost base that the F&B sector has faced is well documented but it’s the top line threat that has become all the more apparent over ...

Last week saw hundreds of passionate 'Extinction Rebellion' protesters hit the streets of London, protesting to raise awareness of the impact of ...

Introducing the next generation of footfall sensor

Since the summer of 2018, we have been busy working on the research and development of the next generation of Local Data Company footfall sensor, ...