The impact of this slowdown in openings resulted in a net loss of -207 shops in the second quarter versus a net increase of +1,284 shops in the first quarter of the year. The net difference between these two periods is the biggest fall between any two consecutive quarters in the past five years.

New vacancies (less than a year vacant) also increased from 3.3% of the total stock (total number of shops) to 3.7% by the half year point. The national shop (retail) vacancy rate stands at 12.2%.

The LDC report, which looks at the first half of 2017 also compares recent results to those over the last five years, and shows that: 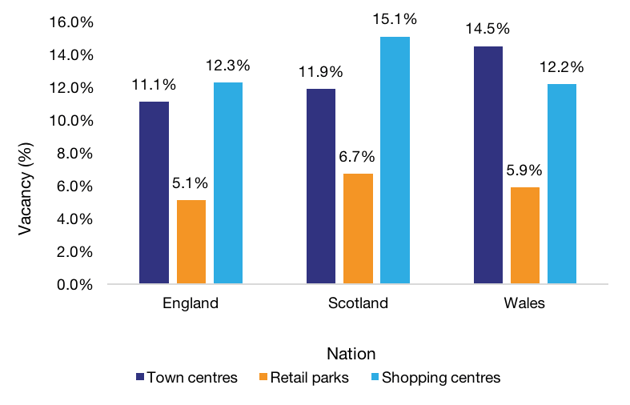 “There was a striking turnaround in the second quarter of 2017 especially when compared to the trends of 2016, in the number of shop openings. The impact of Brexit is clear with Q2 showing a net loss of nearly 500 shops versus positive growth in the previous quarter.

Not only has the trend turned negative with more closures than openings but the volume of activity has also dropped by 25%. Whilst the numbers are currently relatively small to the total number of shops, the vacancy rate in Q2 started to rise and is likely to continue to do so if the current uncertainty continues.

The role of physical retailing continues to evolve and the place that a shop has in the overall buying cycle varies from brand to brand and sector to sector. Stores continue to perform a vital role in the purchase cycle and consumer journey but the key questions remain around how many shops you need, what kind of format and in which locations. With rising costs everywhere for retailers, margins are being squeezed and therefore understanding these micro to macro location trends is fundamental for retailer success. Shorter lease lengths and more proactive management by landlords is likely to increase the number of openings and closures of stores and thus more fluidity in the UK’s high streets. The changes in the first half of 2017 are a clear indicator of the uncertainty that permeates across all aspects of the UK economy.”

The report’s findings will be presented at LDC’s 16th Retail and Leisure Trends Summit this morning at the offices of Berwin Leighton Paisner LLP in London. The report will then be discussed by an expert panel of landlords, investors and retailers for more information on the event click here.