2016 has been an interesting year to say the least. With all of the noise and turmoil its only understandable that some things will have slipped under the radar; one of these has been the story of signs of green shoots in our town centres and in evolving retailing trends.

The 4th LDC and Institute for Retail Studies (University of Stirling) Scottish Retail Report (2016) delivered a number of interesting and positive trends.

First of all it was good to see the downward trajectory of vacant units in shopping centres and town centres - very often this measure is used as a barometer of the health and vibrancy of a place. There is still too much retail space which needs to be replaced with more relevant uses, but this is a start.

Then there was the growth of independents; new retailers coming back to the high street which was encouraging in terms of seeing confidence returning to places which aim to be unique and different and try to reflect the needs and aspirations of their customers - places like Gourock and Kilmacolm in Inverclyde to Kirkcudbright and Moffat in the South of Scotland.

Percentage of Multiples vs Indepdendent retailers in Moffat. Source LDO.

And more growth can be attributed to the new aggressive discounters – the pound stores, the bigger retailers developing smaller footprints and formats for convenience stores, the rise in vaping shops, craft and creative and the explosion in café culture. 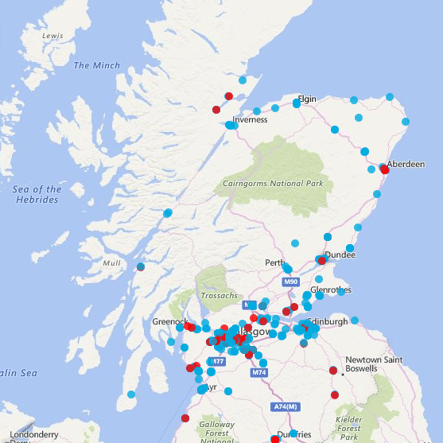 Online retail growth is also still strong and remaining in year on year double digits; but after years of rampant growth it too is beginning to plateau. Mobile is starting to cannibalise tablet, customer to customer is exploding with an army of online Amazon and Ebay retailers, Gumtrees, the Gig Economy - entrepreneurial opportunities a plenty!

Coupled with recent research on turnaround towns from Carnegie, the SURF Awards in December which highlighted improvements in places like Lochgelly, Auchterarder and Linwood, our own towns conference in Kirkcaldy which was about 'Unlocking the Potential of Scotland's Towns' and the vibe created by Scotland's best future town design competition which was won by the Fort William Town Team. It's great to see so much improvement and positivity. So why is this happening?

Perhaps in Scotland we are beginning to see better evidence based approaches being deployed - the Scottish Governments Town Centre Action Plan and the Understanding Scottish Places data tool which provides new ways to analyse the facts and help develop grounded strategy. The LDC/Institute of Retail Studies Report is also a great tool which provides a strategic analysis of retail trends.

Basing decisions on hard data and trend analysis seems to be making an impact and hopefully this can continue into 2017.

On September 14th 2017, we held our 16th Retail & Leisure Summit where we launched our NEW Footfall Heatmap and released data on the latest trends of ...