Retail vacancy and structural change in Scotland’s towns and cities

For the last four years, mid December has seen the release of the latest edition of the LDC/University of Stirling Retail report on the situation of retailing in the major towns and cities across Scotland. Last Tuesday saw the fourth edition formally launched at a breakfast event at KPMG in Edinburgh, with coverage across various media – though with various slants, ranging from wanting to see the news as positive to wanting to turn it into the negative.

So what does the report actually show? As one might imagine with the wealth of data that LDC collects on a regular and consistent basis, one benefit comes in looking at the data at the local level and seeking to work with place managers to understand and direct change. Our annual report does not deal with that level, leaving that to the relationships between the LDC and local authorities, but rather takes an aggregate picture of the data to consider national trends and place these in the context of the country and its neighbours.

The headlines for us therefore were:

With over 130 towns and cities in the report there is of course much to digest and variability of results, dependent on local circumstances, is to be both expected and encouraged. Overall though, it would seem like the story is one of change coming to Scotland’s towns, albeit slowly. Again, this might be expected given the 50 years of decentralisation that has been occurring and that we are now trying to counteract. 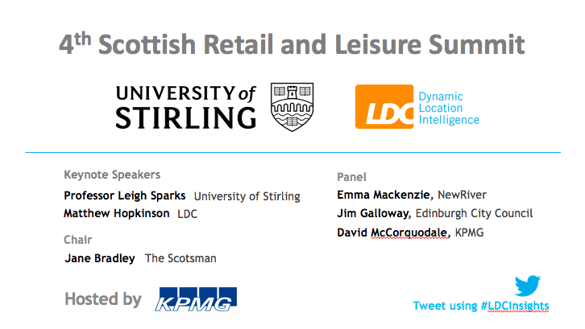 Following presentations on the report by Matthew Hopkinson and Leigh Sparks, the panel (details above) got stuck into the issues raised and what they saw happening on the ground in their businesses, places and contacts across the country.  A number of themes emerged in the course of the discussion, including some directly raised from the engaged audience:

The discussion was lively and thought provoking and suggested a real engagement in finding solutions to the problems of our towns. It is important to recall that the evidence is showing that many towns and places are “getting it” and making strides in improving their situations.

Will vacancy rates continue to fall in Scotland’s towns? Stay tuned for next December!

Full details of the report and how to purchase a copy can be found here.

The introduction to the report (by myself and Lorraine Ferguson) can be found here.

The Press Release from LDC about the report which provides some specific results for selected towns can be found here.

Professor Leigh Sparks is Professor of Retail Studies at Stirling University and can be found on Twitter @sparks_stirling.

No frills fitness - a strong and healthy market

Just one of the trends we have been tracking over this year at LDC is the increasing focus on all things health and wellbeing, which continues to ...

Technology in the leisure sector - is it too little too late?

Wherever you look, whether it is your weekly online shop, your digital wallet on your phone or your Smart TV, it is clear to see that technology is ...

After a month of indulgence, the beginning of a new year gives us a chance to start a fresh. January is the month where we all look to make ...