Retail chain store closures fall to 14 stores a day- the lowest level since 2010, say PwC and The Local Data Company

Despite the advance of online retail and a testing economy, the number of chain retail outlets closing on Great Britain’s high streets is at its lowest level for seven years, PwC research compiled by the Local Data Company (LDC) reveals.

The analysis tracked 67,521 outlets operated by multiple retailers* in 500 town centres across Great Britain.  In the first six months of 2017, 2,342 shops opened on Great Britain’s high streets, retail parks and shopping centres alongside 2,564 closures, equivalent to 14 closures per day.

The net difference between store openings and closures in H1 2017 has shrunk significantly to 222 stores compared to a net loss of  503 in H1 2016.  This represents the smallest net decline since H1 2013, when 209 more stores closed than opened (See Figure 1).

The UK retail sector has higher online sales as a percentage of total retail sales than the United States or any country in Europe. Desktop PCs are still the most popular device for placing online shopping orders but mobile devices, especially smartphones, are catching up.**

“It’s encouraging to see the high street holding up - and even rallying in some cases. The twin cannons of increased online purchases and a tough economy have seen many retailers take a long, hard look at their store portfolios. There will always be a physical presence on the high street, but developments in technology are accelerating and impacting future staffing and operating models.

“Ways of shopping are continuously transforming and include subscription models, the connected home, and companies using data analytics to suggest your next purchase. Major questions are beginning to be asked about who will ultimately ‘own’ the consumer.

“The UK is one of the world leaders for consumer online purchases. Retailers must continue to evolve if they are to make the most of both new digital opportunities and the country’s high streets.” 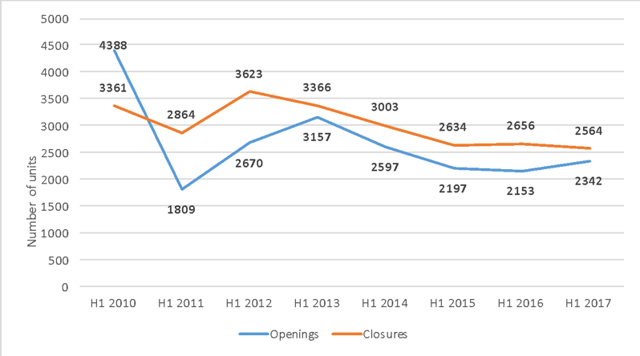 Tobacconists, beauticians and coffee shops are among those growing at the fastest rate during the first half of 2017. Ice cream parlours have also seen an increase, with occupiers such as Kaspa’s Creams and Ben & Jerry’s expanding their networks.

The data reveals that across multiple retailers in 500 town centres, charity shops, shoe shops, gift shops, and women’s clothing shops were among the hardest hit in the first half of 2017.  With the emergence of online property portals (e.g.Rightmove) supporting homebuyers and homeowners’ property needs, high street estate agents saw a net decline of 36 units (78 openings vs. 114 closures).

“The relatively low level of net closures in the first half of this year reflects a more stable environment, with consumer confidence proving more resilient than expected as the year unfolded.  Historically the number of retail insolvencies has been a major factor in the volume of store closures. 2017 is on course to post the lowest level of administrations for more than a decade, with a favourable impact on overall store numbers.

The environment is, of course, uncertain, with recent data showing a more challenging retail environment. I expect net store closures to be an ongoing feature of the market. Retailers will choose specific closure stores very carefully and will aim to capitalise on leases expiring in the ordinary course of their businesses.”

Shoe shops, charity shops and women’s clothes shops were the three hardest hit sectors. Gift shops and card and poster shops have also been affected, with these categories appearing in the bottom six for the first time.

However, categories that have seen significant  net declines in previous years are getting closer to some form of  equilibrium,  with cheque cashing (-13 units), banks (-32), general fashion shops (-25) all posting their lowest net closures for three years. 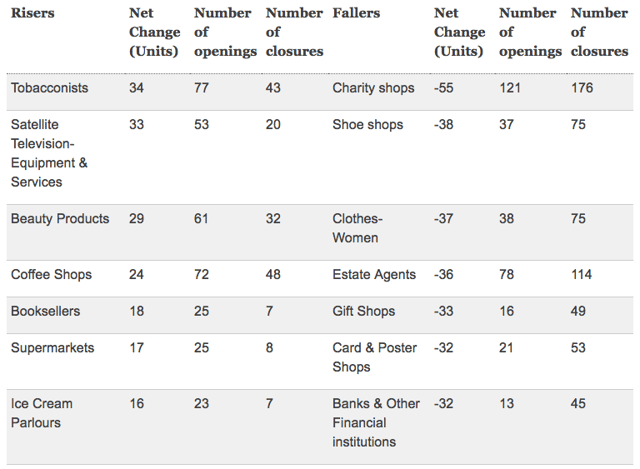 Across the regions and nations... 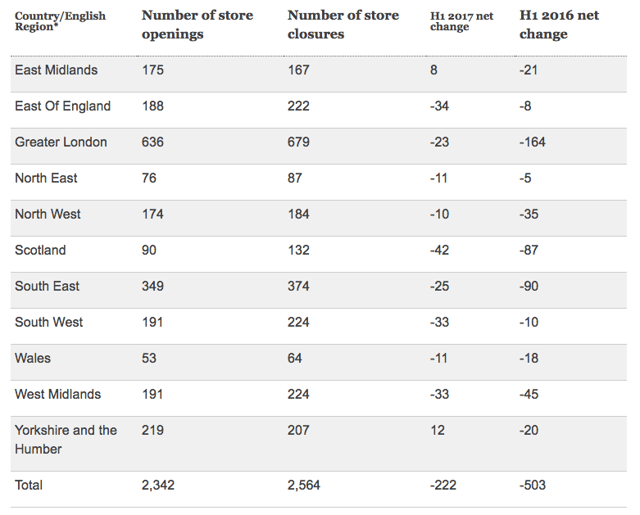 Table 2. Openings and closures of multiple retailers by region across the top 500 GB town centres in H1 2017 (Source: LDC)

Scotland saw the largest number of net closures across all the regions. The nation’s net change however did decrease from -87 in H1 2016 to -42 in H1 2017. East Midlands and Yorkshire in the Humber, were the only regions to see a net increase in chains of +8 and +12 respectively.

“The reduction in the number of chain retailers closing in Britain’s town centres indicates an increasing degree of stability for many towns that have seen the significant loss of multiple retailers over the last ten years. From an average loss of 540 chain shops every six months to just -222 in H1 2017 is a major slow down.

“Regional variances show the importance of understanding local economies. Some regions such as Yorkshire and the Humber have shown a significant turnaround from a loss of 20 units in H1 2016 to growth of 12 units on H1 2017.

“It is the leisure sector that is creating more openings than closures on our high streets while traditional shops and services, such as clothing and banking, continue to close stores. If the leisure offer has reached saturation, which I argue it has, then this slowdown in the closure rate might be short lived if the leisure growth rates reduce from their current levels.”

At PwC, our purpose is to build trust in society and solve important problems. We’re a network of firms in 158 countries with more than 236,000 people who are committed to delivering quality in assurance, advisory and tax services. Find out more and tell us what matters to you by visiting us at www.pwc.com.

PwC refers to the PwC network and/or one or more of its member firms, each of which is a separate legal entity. Please see www.pwc.com/structure for further details.

About the Local Data Company

LDC is the UK’s leading data creator using real people on the street to acquire the most up to date, on demand location and company specific data for the retail and leisure sectors. It combines powerful proprietary technology with a unique, field researched database of over half a million premises. LDC delivers primary evidence on thousands of companies and locations, including high streets, town centres, shopping centres, retail parks and standalone out of town stores.