Press Release: The evolution of bricks and mortar retailing gathers pace as redevelopment of units increases by 32%

The number of units that were structurally changed or redeveloped (demolished, merged, split or converted for another use such as residential or logistics) increased by 32% in 2018 as landlords and place managers work to re-imagine requirements for bricks and mortar retailing. A new report released today by retail location insight business the Local Data Company reviews changes across over 650,000 retail and leisure units to analyse the rate of UK market change in 2018. The number of units being redeveloped increased from 2,646 in 2016, to 2,706 in 2017 and jumped to 3,577 in 2018. This year-on-year increase shows the growing trend for landlords to reconsider how existing retail stock is best used to meet the changing needs of consumers. 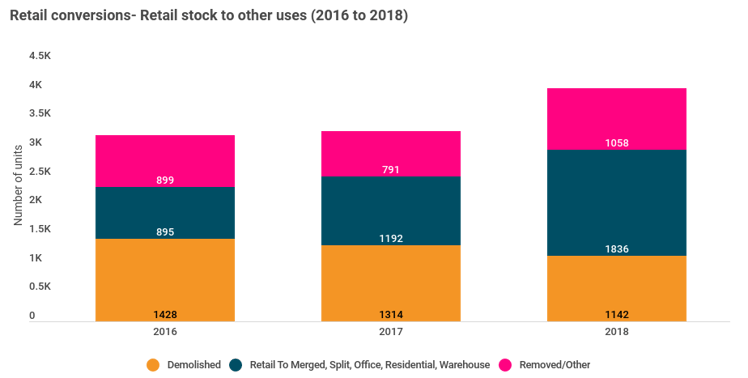 Figure 1: Redevelopment of retail stock between 2016 to 2018 (Source: The Local Data Company)

This structural change is serving to mitigate the impact of a significant slowdown in openings of new stores which resulted in an overall net loss of occupied units of -7,550 – equating to 1.2% of the entire retail and leisure market. The closure rate increased marginally with 50,828 shops closing in 2018 compared to 50,767 in 2017. The rate of openings decreased by almost 2,000 over the year, resulting in record losses which saw over 20 stores a day closing their doors for the final time. However, the average vacancy rate across the country only rose by 0.3% in the year from 11.2% to 11.5%, still below a high of 12.5% seen in 2013; revealing how an increase in structural changes to units is preventing the vacancy rate from rocketing upwards. 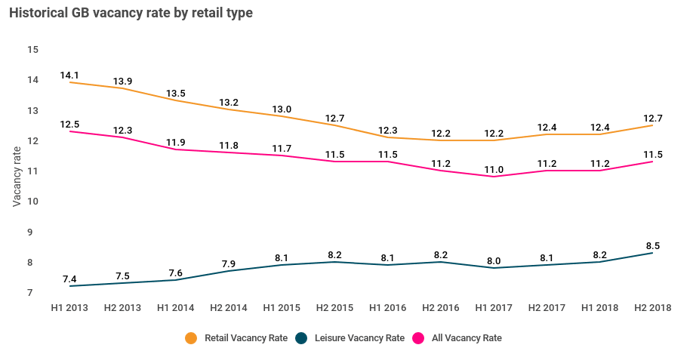 The location type hit the hardest by a year of turbulence was retail parks, which saw an increase in vacancy rate of 2.3% in 2018, rising from 4.9% at the end of 2017 to 7.1% at the end of 2018. 2018 saw a host of retail park occupiers facing challenges, with Toys R Us, Maplin, Poundworld, Carpetright and Multiyork all closing larger format stores. As of April 2019, only 17% of the 274 retail park stores for the aforementioned retailers have been reoccupied, leaving 226 vacant units. With a reducing pipeline of occupiers who have an appetite for large-format sites, retail park owners will need to increase the rate at which they redevelop their property.

"2018 was another unprecedented year of change as the sustained challenges faced by many legacy brands collided with an advent of new concepts – these constantly shifting sands making conditions tougher than ever for most operators. However, any headline statistics by no means represents the full story and beneath some undeniably stark high-level numbers we can see a multitude of emerging trends and brands which hint at a very bright, diverse future for our high streets. This is shown particularly by two years of strong growth in more service-led categories such as barbers and beauty salons. Alongside this, a more diverse assortment of restaurants are increasingly opening on our high streets, serving up fresh and exciting cuisines such as Iranian, Malaysian and, of course, Vegan.

The significant increase in structural redevelopment of retail space across 2018 indicates that landlords, place managers and councils are starting to take action to critically review how much retail stock is in the market and how much is actually required. Over the coming months, we expect this trend to increase, and with it will come a redefinition of not just our high streets, but shopping centres and retail parks too.

Retail parks had a tough 2018 due to a raft of CVAs and administrations, the impact of which is still clear to see as 75% of the Toys R Us stores are still vacant a year on. The trend for structurally altering units will have a significant impact on retail parks and will bring with it a diversification of the types of retailers that we’ll see opening in these locations.

The first four months of 2019 has already seen the likes of Debenhams announce a CVA and the owner of Cotswold Outdoor also revealing closures. It will be interesting to see if this denotes a further year of turmoil for the industry or if this is perhaps the storm before a calmer period in H2 2019.”

Other key findings from the report:

The full report is out now and is available to download here.

At the Local Data Company, we are always amazed by the rate of change across the UK retail and leisure market which sits at about 20% each year, as ...