In Great Britain, the average rise in vacancy rate between March 2020 and 2021 was 1.9%. However, there were some locations where change in vacancy stayed in the negative. These ‘resilient’ locations already saw vacancy rates decline between 2016 —2020, a decline that continued in the 12 months since the first lockdown. Why were these areas so resilient before the pandemic, and why have they remained resilient during it?

This is the second in a two-part series on the 14 most resilient locations in Britain. To read the first part, click here. 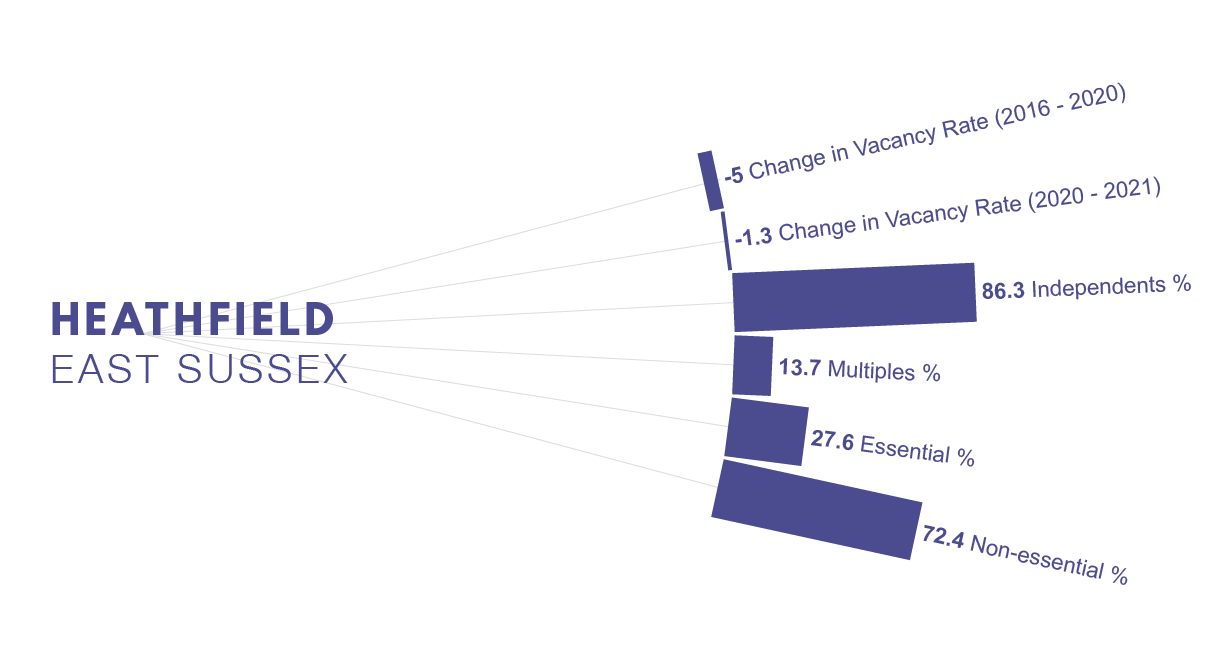 The small market town of Heathfield in East Sussex sits almost exactly halfway between Tunbridge Wells and Eastbourne. Historically, Heathfield lay on The Ridgeway, a road connecting the South Downs to the Weald; Heathfield benefitted from the Weald’s iron industry until the last forge closed in 1813. By the time the Cuckoo Line railway closed in 1968, the town looked very much like it does today, with a town centre bearing the influences of Victorian and Edwardian architecture and surrounded by rolling countryside.

A change in vacancy rate of -5.0% in the four years to March 2020 may be due to a high proportion of independents, 86.3% compared to the national average of 65%. This also may have aided a change of -1.3% in the year to March 2021, which was further helped by 27.6% of retailers being classed as independent, just over 10% more than the GB average. 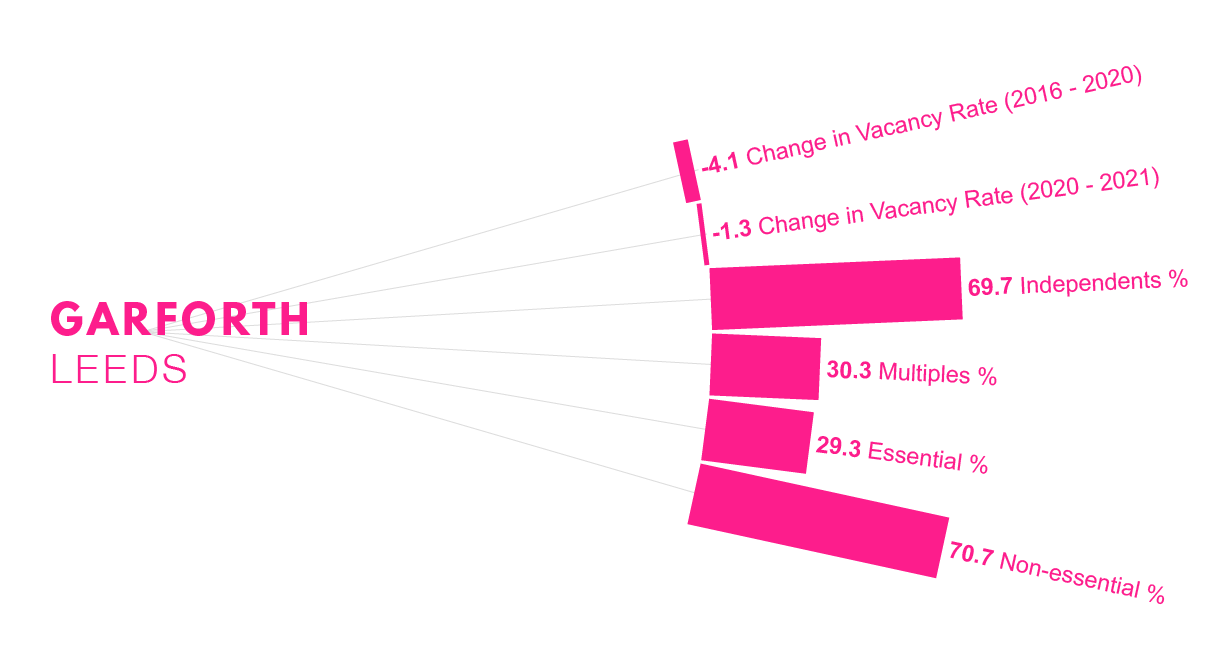 The Leeds town of Garforth, and its surrounding settlements, prospered in the 17th and 18th centuries thanks to a strong coal mining industry. It is increasingly becoming a commuter town; links to the M1, A1 and M62, along with its rail connections, make Garforth a desirable base for workers.

In the four years to 2020, Garforth’s change in vacancy rate was -4.1%. Like Morley, Garforth town centre also boasts a higher proportion of service retailers than the GB average, making up 38% of occupied units there. Garforth’s increasing status as a commuter town may have contributed to a -1.3% change in vacancy rate in a year of lockdowns. Commuter towns generally remained resilient during lockdown, as many were made to work from home and therefore spend more time and money locally. 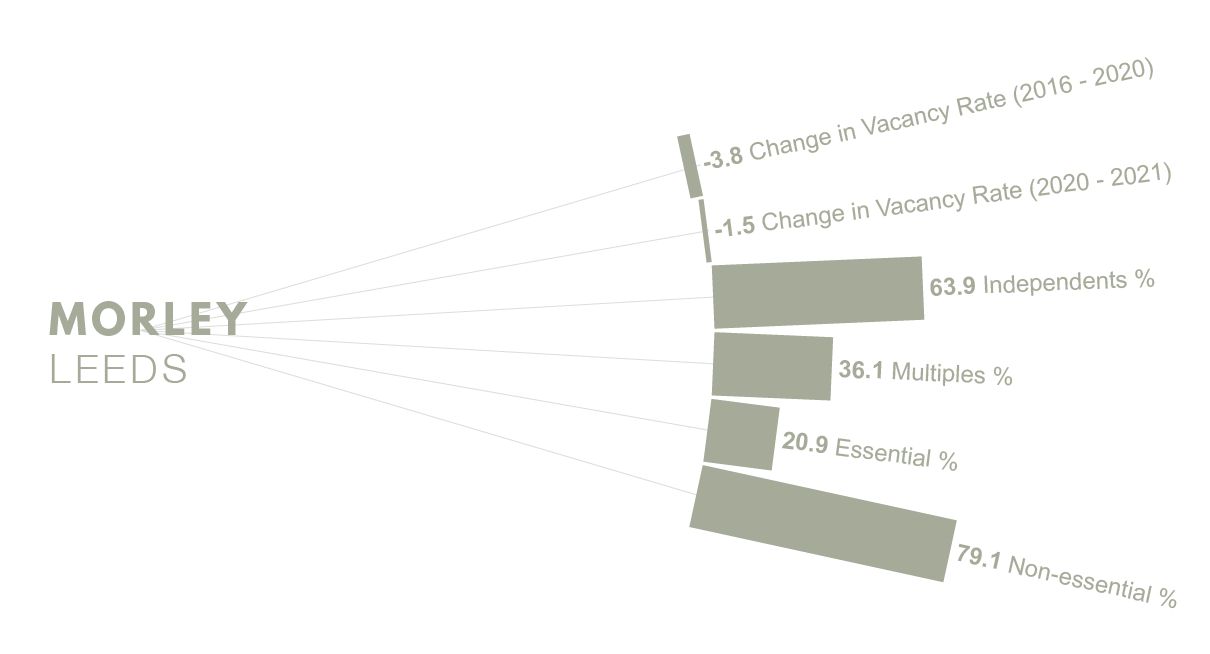 Five miles southwest of Leeds city centre, Morley forms part of West Yorkshire’s Heavy Woollen District, which was a hub of heavy textile production in the 19th century. The hosts of the country’s largest St. George’s Day celebration, Morley has been called ‘the most patriotic town in the UK’ by the press. A Grade I- listed Town Hall and one of the oldest covered markets in the country form key parts of the town’s identity.

In the four years before the first lockdown, Morley town centre saw a -3.8% change in vacancy rate. The high percentage of service retailers concentrated around the area, 10% more than the GB average of 29%, may be a factor. Most of these are hair and beauty salons, which have been growing in number in the UK in recent years. In terms of year-on-year net change in number of units, barbers and hairdressers have remained resilient for a number of years. However, salons and barbers had to close their doors for much of the March 2020-2021 period. However, within its number of service retailers, Morley also has an above-average proportion of banks and building societies, which did stay open. The presence of essential services like these might have aided Morley’s -1.5% change in vacancy rate over the year. 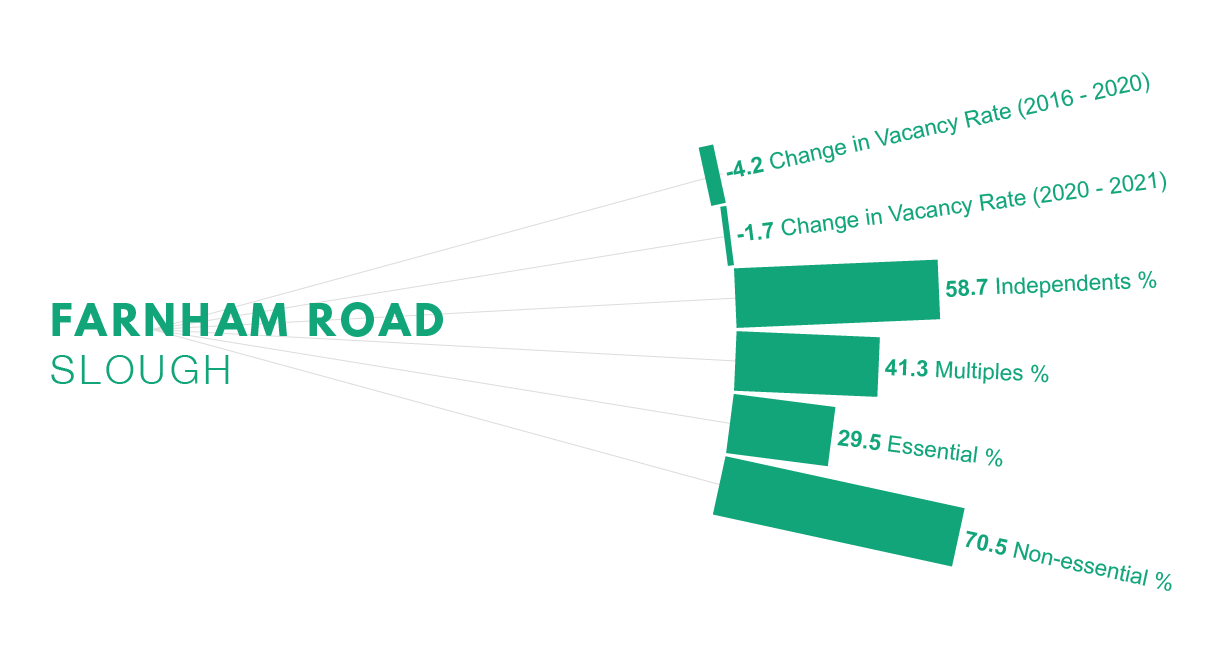 The Berkshire town of Slough grew with the development of the Great Western Railway in 1833 and the Slough Trading Estate later in 1920, which today is Europe’s largest industrial estate in single private ownership (and the setting for ‘The Office’). It has the highest concentration of UK HQs of global companies outside of London.

Farnham Road, less than two miles from the rail station, proved resilient in the four years to 2020, with a -4.2% change in vacancy rate. From March 2020 to March 2021, that change was -1.7%. As a commuter area, one with 29.5% of retailers classed as essential (again, higher than the 17% national average), Farnham Road remained accessible and largely open to home workers in the last year. 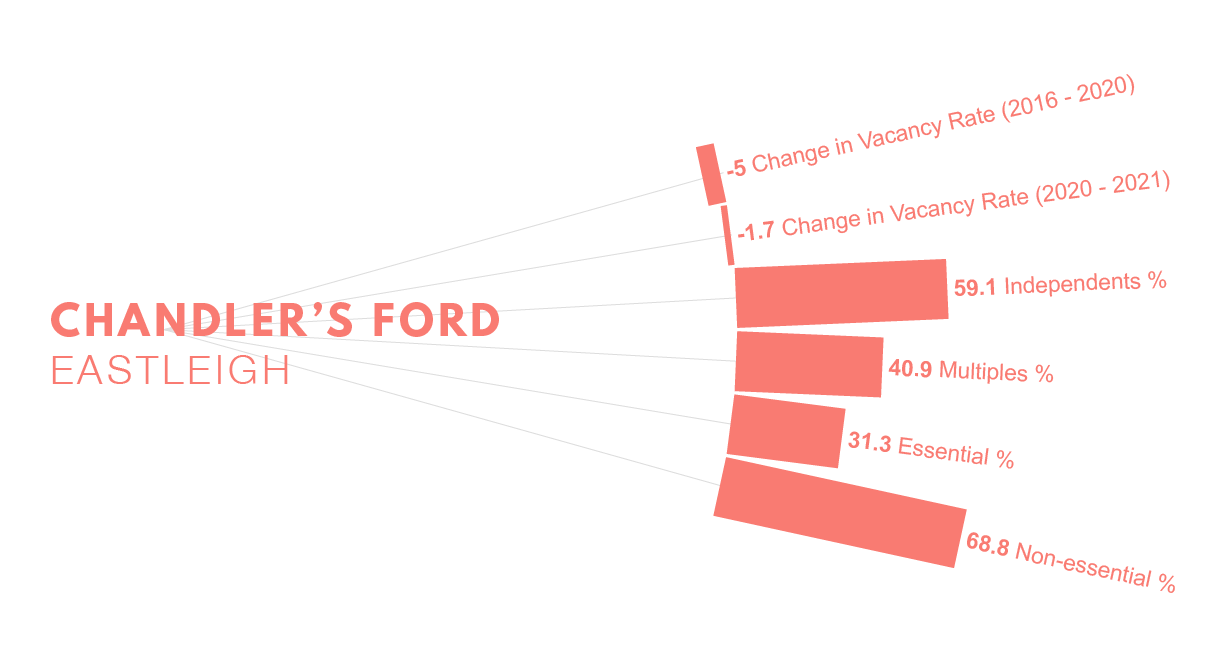 The village of Chandler’s Ford in Eastleigh is mainly residential, yet is home to several head offices including that of B&Q. Sparsely populated until the 19th century, the area was historically home to farmers working on local arable land. The railway station, which reopened in 2003 after having been closed since 1969, runs an hourly South Western Railway service stopping at Southampton and Salisbury.

The village’s commercial centre has one of the highest proportions of essential retailers on the list, with 31.3% compared to the average of 17%. Like the other locations on the list, Chandler’s Ford also over-indexes on service retailers, 48% compared to the GB average of 29%. The -5.0% change in vacancy rate in the four years to 2020 and the -1.7% change in the year to 2021 reflect the highly residential status of the area, contributing to its resilience even in a year of restrictions. 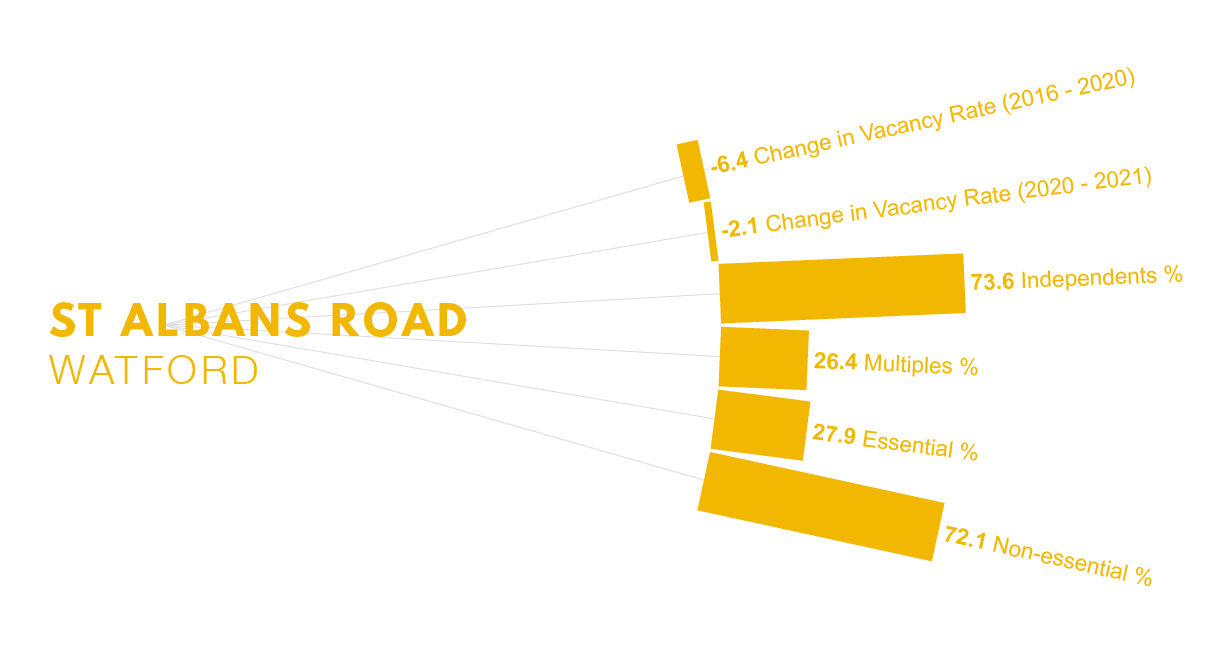 The Hertfordshire town of Watford was initially a smaller market town until the construction of the Grand Junction Canal in the late 18th century led to a rise in paper mills, print works and breweries. Its proximity to London, supported by strong transport links, has encouraged both companies and commuters to base themselves in the town.

Leading from Watford Junction Station, St. Albans Road is Watford’s main shopping street, which had a -6.4% change in vacancy rate in the four years to 2020. 73.6% of retailers in the area are independents, which would have encouraged conscious shoppers to stay local even before they had to. From March 2020 to March 2021, the change in vacancy rate was -2.1%. Work-from-home orders might have meant that workers weren’t shopping in the city, but the proportion of both convenience and service retailers, both higher than the GB average (27.9% of all retailers on St. Albans Road were classed as essential), might have meant that the citizens of Watford didn’t need to look further than their local high street anyway. 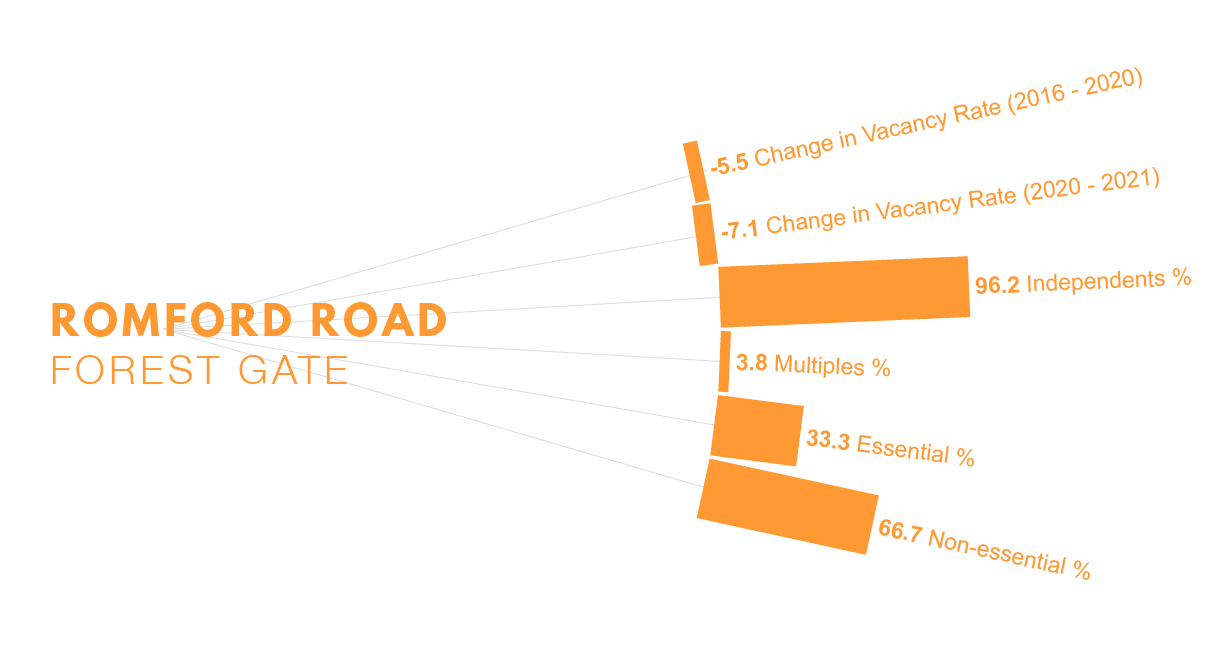 The name for London’s Forest Gate comes from an actual gate, since demolished, that was used to prevent cattle straying into the road from Wanstead Flats. The area remained rural until the 19th century, until city dwellers established country residences there. Since then, Forest Gate has developed a rich musical and cultural history— Jimi Hendrix wrote ‘Purple Haze’ while he was there in 1966— and the shopping district of Green Street, known for its South Asian fashion, jewellery and food, ends on Forest Gate’s Romford Road.

Romford Road was a resilient area even before the pandemic, with a -5.5% change in vacancy rate in the four years to 2020. However, in the year to March 2021 alone, it saw a -7.1% change in vacancy rate. Of the areas on this list, it has the highest proportion of independent retailers at 96.2%, 31.2% up on the GB average. It also has the highest percentage of essential retailers of the areas on the list, at 33.3%. The highest percentage of shops staying open, then, along with an overwhelming proportion of independent retailers, provide clear-cut reasons for Romford Road’s resilience during a challenging year for retail.

The Recipe for Resilience

Even before the pandemic, these locations seemed to follow a recipe for resilience: a higher proportion of service retailers than the GB average, including growing categories such as salons, and fewer comparison retailers, who have generally seen greater vacancy rates in recent years. The most prevalent retail sub-categories in the 14 locations were estate agents, charity shops, salons, convenience stores, cafes, and takeaways.

This formula for resilience continued to hold as lockdown measures were introduced and restrictions were placed on many businesses: 13 of the 14 areas on this list had a higher proportion of essential retailers compared to the GB average. Simply put, more units stayed open. The highly residential nature of these towns also meant that those confined to their homes shopped locally. Shopping local also meant supporting local independents, which eight of the resilient locations have an above-average proportion of.

Even as workers make a (limited) return to the office and non-essential retail begins to reopen, it looks likely that some trends will continue. Retailers adapting to a new, post-Covid, normal may find inspiration in the UK’s most resilient locations.