2020 was a time of change and unpredictability. A year of lockdowns and tiered restrictions meant that many retailers had to close their doors, some permanently.

In Great Britain, the average rise in vacancy rate between March 2020 and 2021 was 1.9%. There were some locations, however, where changes in vacancy rate stayed in the negative. These ‘resilient’ locations already saw vacancy rates decline between 2016-2020, a decline that continued in the 12 months since the first lockdown. Why were these areas so resilient before the pandemic, and why have they remained resilient during it?

In the first of a two-part series, we take a deeper dive into the 14 most resilient locations in Great Britain and explore the reasons for their resilience before and during the pandemic. 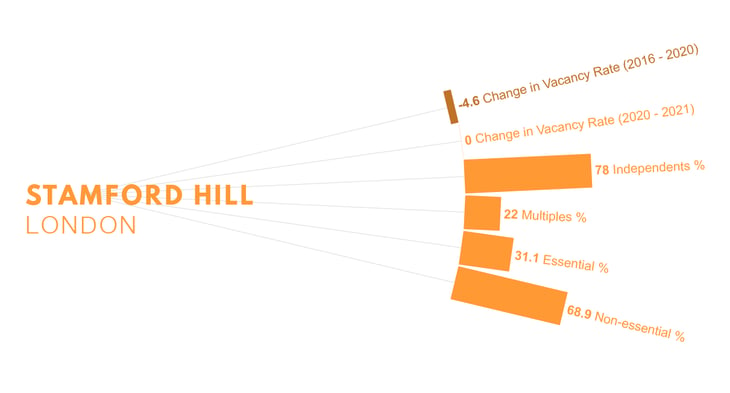 London’s Stamford Hill is a sub-district of Hackney, situated on the old Roman road of Ermine Street (now the A10). The arrival of the railway in 1872 helped grow the area into a busy interchange—today, nearby rail and tube stations connect Stamford Hill to the rest of London.

The town centre is home to a high proportion of independents, 78% compared to the average 65%, which may go some way to explaining the -4.6% change in vacancy rate in the four years to 2020. Although Stamford Hill does not over-index on service retailers like many of the locations on this list, rather having a much higher proportion of comparison retailers, it still has a higher percentage of essential retailers than the GB average, 31.1% compared to the average 17%. The presence of these essential retailers might have created little reason to travel further afield for most residents during lockdown, contributing to a 0.0% change in vacancy rate in the year to March 2021. 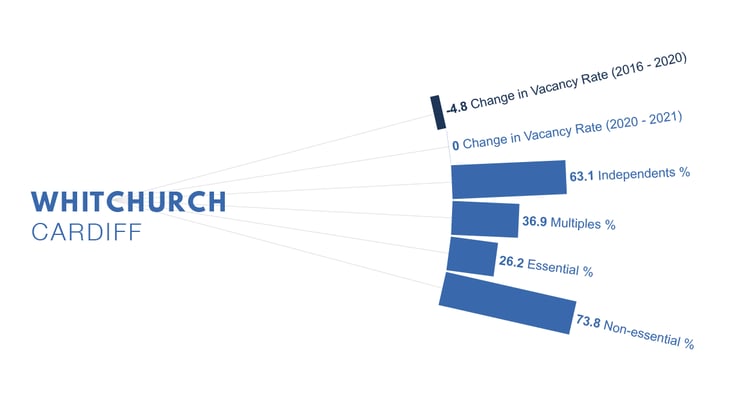 Until the early 18th century, the Cardiff suburb of Whitchurch only had a population of about 300 working on local farms. This rose to nearly 5,000 in the 19th century, thanks to the mill at Melingriffith aiding the manufacture of iron and tinplate. Castell Coch, originally built by the Normans and since rebuilt, overlooks the neighbouring village of Tongwynlais.

Whitchurch town centre saw a -4.8% change in vacancy rate in the four years to 2020, 0.0% in the year to March 2021. 26.2% of retailers in the area were classed as essential, compared to the GB average of 17%. The majority of locations on the list also have an above-average amount of essential retailers compared to non-essential, and therefore a higher number of shops that stayed open throughout the lockdowns.

Two miles west of Sheffield’s city centre, the village of Broomhill was known as Crooks Moor until William Newbould built a house there in 1792, naming it ‘Broomhill’. The area began to develop over the next century with the introduction of important buildings and trade routes.

Today, Broomhill, a short walk away from Sheffield Botanical Gardens, is a resilient district that saw a -0.5% change in vacancy rate in the year to March 2021, leading on from a change of -4.7% between 2016 and 2020. This may be due to a high proportion of independent retailers, 81% against the GB average of 65%. Many of the locations in this list have a high proportion of independents compared to the national average, contributing to their continued resilience before and during the pandemic. Independents had already been more resilient in recent years, in line with an increased interest in ethical consumption, but the desire to support local businesses during a difficult time encouraged many to continue to shop with independent retailers.

The Portsmouth neighbourhood of North End lies on Portsea Island, a stone’s throw from Portsmouth Harbour and a short drive to the beach at Southsea. The island itself has the highest population density of anywhere in the UK outside of London and the third-largest population of all the islands in the British Isles, behind Great Britain and Ireland.

North End saw a -4.7% change in vacancy rate in the four years to 2020 and a -0.6% change in the year to March 2021. A relatively low proportion of comparison retailers, 18% compared to the GB average of 27%, might have been a factor due to their non-essential status closing them for much of the year. Comparison retail had already seen a decline in the past few years, particularly fashion retail, with many businesses falling into administration or launching CVAs. According to ONS figures, in 2020 alone, retail sales across the fashion sector declined by 25.1%, the highest annual decline across all retail categories. Restrictions on travel led to the rise of the ‘staycation’ while domestic stays were allowed, with British tourists bringing business to seaside towns and their surrounding areas. 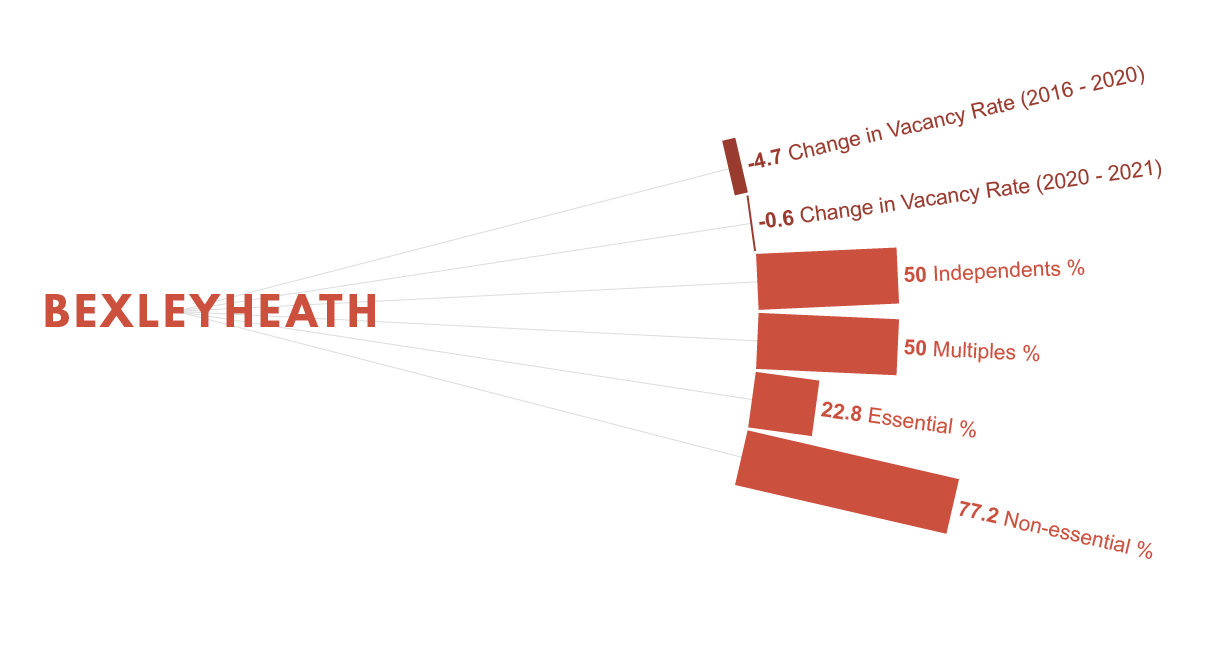 Located in the London Borough of Bexley, Bexleyheath was once home to Walthamstow-born designer William Morris, whose house is now a Grade I-listed example of Arts and Crafts architecture. In 1912, a clock tower was built to commemorate the coronation of King George V. The clock tower lies at the centre of the main shopping street, the Broadway, home to Broadway Shopping Centre and an even split of multiples and independent retailers. Rail connections to London Victoria and Charing Cross make Bexleyheath popular with commuters.

Bexleyheath saw a -4.7% change in vacancy rate from 2016 —2020. It is the only town on the list to have a lower proportion of independents than the 65% GB average, at 50%. Its -0.6% change in vacancy rate in the year to March 2021, then, may be due to its status as a commuter town and 22.8% of retailers having been classed as essential, remaining open for the home workers in the area. 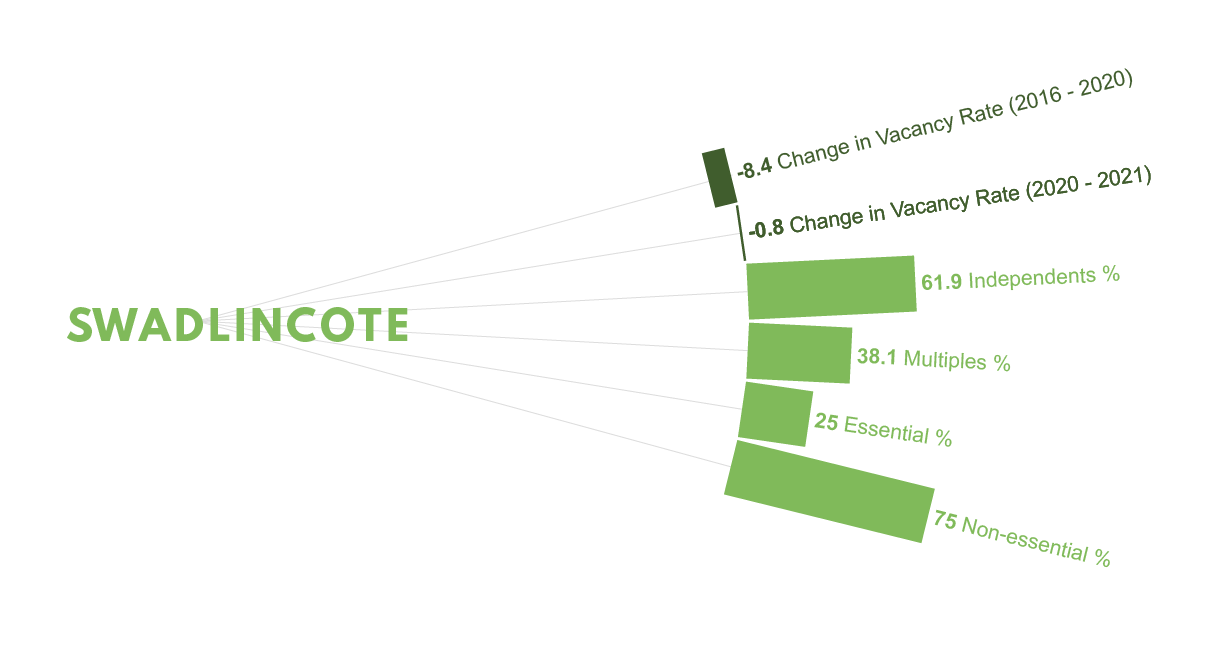 The former mining town of Swadlincote in South Derbyshire is one of the UK’s largest towns without a railway station. The presence of coal and clay drove Swadlincote’s urbanisation, with these industries growing until the Second World War. The town is situated at the heart of the National Forest project, which aims to link ancient forests with newly planted areas between Leicester and Burton upon Trent.

Swadlincote had the biggest change in vacancy rate on the list in the four years to 2020, at -8.4%. The lack of a railway station may go some way to explaining this; it’s likely that many Swadlincote residents live and work nearby, keeping its town centre well-patronised. In the year to March 2021, the change in vacancy rate was -0.8%. 25% of retailers in the town centre were classed as essential, and the high percentage of service retailers — 38%, compared to a GB average of 29% —provided plenty of reason to return to the town centre amid restrictions.

According to archaeologists, the large town of Sale in Greater Manchester seems to have been a hive of activity for Stone Age, Roman and Anglo-Saxon communities. In the Middle Ages, the town, along with the neighbouring Ashton upon Mersey, played host to crop and cattle farmers. Later, the introduction of a canal and railway stimulated Sale’s growth into a commuter town for Manchester, now supported by the Manchester Metrolink network and the M60.

The reason for Sale’s -4.8% change in vacancy rate in the four years to 2020 might not be immediately obvious looking at the retail mix in the area; with only a 2% higher proportion of both independent retailers and essential retailers than the GB averages, and the proportion of comparison stores matching the GB average, the town doesn’t seem to share many ‘resilient’ attributes with others on the list. In the year to March 2021, Sale saw a -1.3% change in vacancy rate. However, as mentioned before, Sale is, and has historically been, a commuter town for people working in Manchester. 33% of units have been occupied by service retailers, mainly salons, estate agents and banks, the former two being among the most prevalent sub-categories in the areas on the list. Sale’s commuter population and its high proportion of service retailers (who were themselves resilient even before the pandemic) may have supported its resilience during it.

In the next instalment, we'll explore the seven remaining locations on the list and ask why, and how, these towns stayed resilient.