Britain’s retail vacancy rate remained stuck at 12.3% in November. The number of vacant shops has now varied by no more than one in a thousand, net, for the past nine months, new figures from LDC show.

The new-found stability set in this year after consistent, gradual improvement since its last peak of 14.6% in September 2012.

The vacancy rate among leisure units stood at 8.2% for the fourth month in a row, easing a long term trend to rise, in contrast to the retail rate, which has fallen.

So the all-vacancy rate, which combines retail and leisure units, remained unchanged at 11.2% for the sixth month in a row and has varied by no more than 0.1% of the current rate for nine full months. That all-vacancy rate is down by just -0.2% over the past year.

This is not to say that rhe retail property market is inactive - roughly in ten properties changes occupier each year, but in November, once again, the key driver of the weakening in improvement was a fall in reoccupations of vacant premises. In November of this year there were 17.7% fewer moves from vacant to occupied compared to the same month in 2015.

The level of empty shops, though, remains more than twice as high as its pre-crash base. 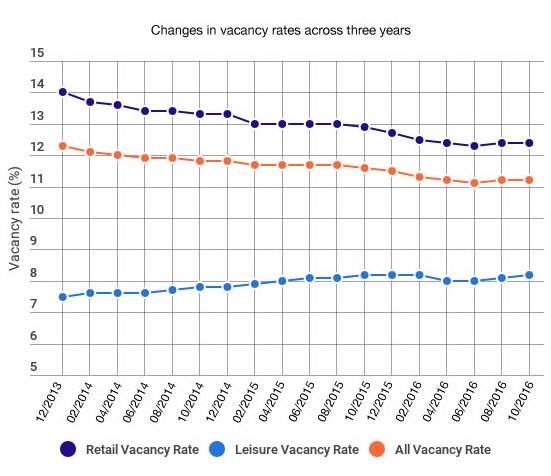 Matthew Hopkinson, Director at LDC commented: “As we come to the end of the year and are well into the Christmas retail peak the steady improvement in vacancy has lost its drive. Our other indices, such as our Health Index and Openings & Closings, show that there is plenty of life in the market, despite the flatness of the overall trend.”

He added: “Looking forward, though, we have often seen the index to start to move as the year turns. January brings change as many leases end around the Christmas quarter day and new tenancies begin. The taste for openings this time will doubtless be conditioned by both current trading and optimism, or otherwise, about the prospects for retail in the run-up to Brexit and beyond.”