Britain’s shop vacancy marginally increased to 12.4% in September from 12.3% in August. Annually this is down -0.5% from the same period last year (September 2015).

There continues to be a drop in activity across the UK retail property market, with activity in September down 26% when compared to the same month in 2015. 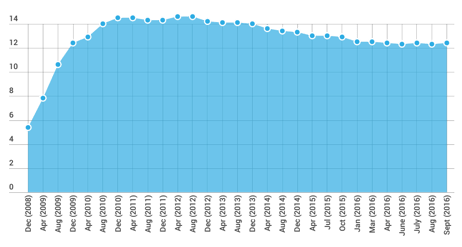 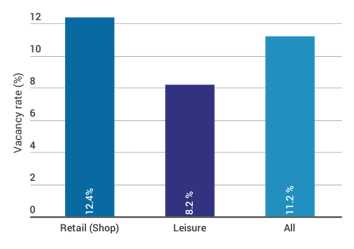 The GB shopping centre vacancy rate (13.4%) dropped by -1.4% in September 2016, when compared to the same period last year (September 2015). GB shopping centres saw the biggest drop across all the location types for the fourth consecutive month. The North East saw the biggest fall in vacancy rates across the GB nations and regions, losing (-2.7%). Wales was again the only area to see a rise in its vacancy rate of +0.6% in the last 12 months since September 2015. This is now an established pattern, with Wales seeing a 12-month increase in vacancy in all nine months of 2016 so far.

Retail park vacancy rates dropped by -0.7% across GB in September 2016. The North East saw the biggest improvements, with a -3.8%, decrease in vacancy in the 12 month period, significantly better than any other region. Hylton Riverside Retail Park is an example of a retail park that has seen positive improvement, with the vacancy rate dropping from 18.8% in 2015 to 5.9% in 2016. Yorkshire and the Humber and Scotland were the only areas to see an increase in their retail park vacancy rates, with rises of +0.5% and +0.9% respectively in the last 12 months.

The town centre vacancy rate showed a year-on-year decrease of -0.5% in September 2016 against 2015, to 10.8%. Scotland was the only region/nation to see an increase in its town centre vacancy rate, picking up +0.8% in the last 12 months since September 2015. This also happened in July this year, possibly showing that occupiers may be looking at alternative retail locations. Scotland saw an increase in its retail park vacancy rate, but no increase in its Shopping centre rate. Retailers are not necessary moving out of town, but rather seeking the healthiest locations in towns across Scotland. 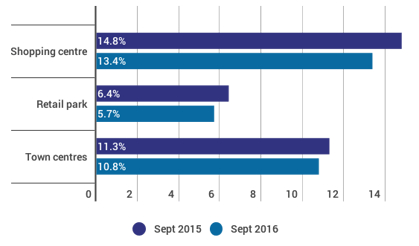 Across GB, 4.4% (11,985 units) of all town centre units have been vacant for over three years. The was no percentage change between Q2 2016 and Q3 2016 in any the persistent vacancy bands, although every band also saw a slight increase in the number of units (under 0.05%). 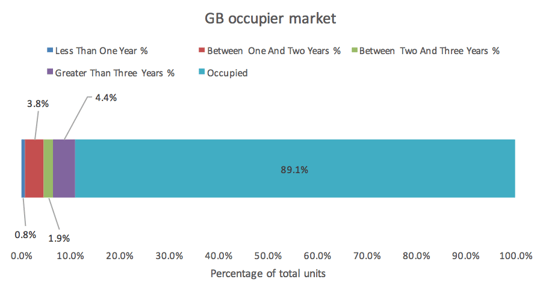 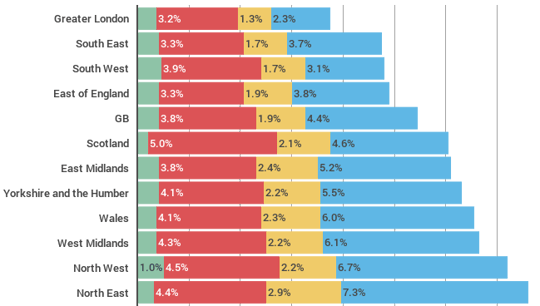 Matthew Hopkinson, Director at LDC commented: “Vacancy has been falling gently but consistently since 2013, but the improvement has been on pause since May. Levels of activity in openings, closings, new builds, demolitions and reuses have moderated. This could be a signal that businesses have been hesitating when making investment decisions, both before the referendum and in the turbulent period since. As it is, vacancy remains at a level more than twice as high as the pre-crash level in 2008.”