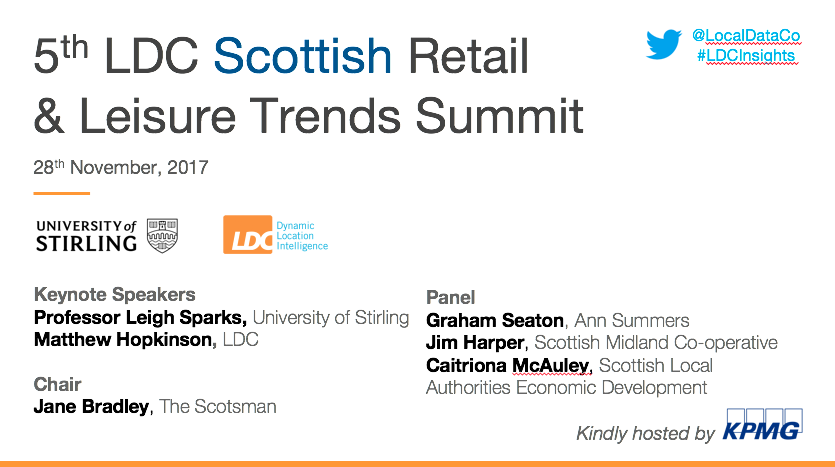 On November 28th, was the Local Data Company’s (LDC) fifth Scottish Retail and Leisure Trends Summit held in partnership with the University of Stirling. The report revealed interesting insights as to how Scottish centres are performing relative to England and Wales but also relative to each other. There was also a short presentation by Chris Fowler of LDC on how data is being captured and used at a local level to understand performance and opportunity with a case study from Aberdeenshire Council on the town of Peterhead.

The report findings were presented by Professor Leigh Sparks of the Centre for Retail Studies at the University of Stirling off the back of which there was an excellent panel discussion (see panellists above) as well as questions from the audience. The key findings can be summarised as follows;

Figure 2. Top five Scottish towns by the number of Independents as a percentage
of the total units in 2017 (Source: LDC)

The panel discussion was wide ranging but key themes that I took away included;

Professor Leigh Sparks summarised what the report was saying as follows;

“Town centres are always changing and it is vitally important to monitor and understand the dimensions of this change. The data from the local Data Company show that the process of adjustment and change across Scotland’s towns and cities continues but is not uniform.

The headline vacancy figure for towns has risen in the last year but this masks a decline in retail vacancy and a rise in leisure vacancy, the latter for the first time since this series began. We have also seen a decline in the number of charity shops. These two sectors are ones which have expanded rapidly in Scotland in recent years, and the data poses the question whether this year’s changes are a pause in expansion or a reverse?

Within the data there are many examples of towns which have been restructuring and redeveloping and thus a focus on one year’s snapshot vacancy figures are unhelpful. Overall, retail vacancy across Scotland continues to fall.”

My conclusions would be that the report reflects the structural changes that are taking place UK wide.

Whilst town centre vacancy rates have stabilised they have not shown the improvement that shopping centres and retail parks have shown, which for some therein lies the challenge.

As with all of LDC’s data the devil is in the detail as well as understanding the wider context. An example is that whilst Scotland’s shopping centres have more occupied shops that in previous years they still have more empty shopping centre units than England and Wales. Is this as a result of oversupply, underdevelopment or that high streets and retail parks are the core destinations for consumers?

The report also evidences the changes taking place in shop occupation in Scotland, with fewer comparison goods shops and more food & beverage and service (e.g. health & beauty) outlets. The reduction of charity shops is worthy of note, as is the reduction in the number of Booze, Money and Gambling outlets (BMG). This is one that many might not expect, but is something that has been a focus for the country’s politician’s and public health organisations.

The changing nature of places and how they serve the modern consumer is clearly evident in this report. An understanding of these changes and alignment to a plan at each and every town level is key to maintaining the relevance and value of Scotland’s towns. As with evolution it is important to maintain a mind-set of adaptability in such a fast-changing world. There remains an oversupply of traditional shops in Scotland, as elsewhere in the UK, but what is clear is that maintaining a physical connection is something that consumers do and will continue to value and support through physical store visits. Thanks for reporting a problem. We'll attach technical data about this session to help us figure out the issue. Which of these best describes the problem?

Any other details or context?

I would like to make a final vote of thanks, as this will be my last Scottish Summit as I move on from LDC at the end of the year, to Leigh Sparks and his colleagues at Stirling (Anne Findlay and Lorraine Ferguson) for working with LDC to create evidence research and insight on Scotland’s towns, cities, shopping centres and retail parks which did not exist previously. By having a foundation of solid data, academic rigour in its analysis and a willingness to share the findings I believe all stakeholders in Scotland’s places can, and will, make better decisions in the future for the good of all. Final thanks is due to KPMG (and especially David McCorquodale) for hosting this event for the last five years in Edinburgh and Glasgow.