Data released today by LDC and British Independent Retailers Association (bira) shows that traditional independent shops opened slightly more shops than were closed in H1 2016 in Britain’s town centres, whilst the national chains continued to see a fall. Independent shops saw an increase of +4 shops (+0.00%) in H1 2016. This is a reversal from the net decline of -194 shops (-0.07%) in H1 2015. A net growth of +200 units in H1 2016 on the High Streets, was one of the main drivers in the growth of independent retailing in H1 2016.

Independents account for 65% of all retail and leisure units in Great Britain, the same as in H1 2015. 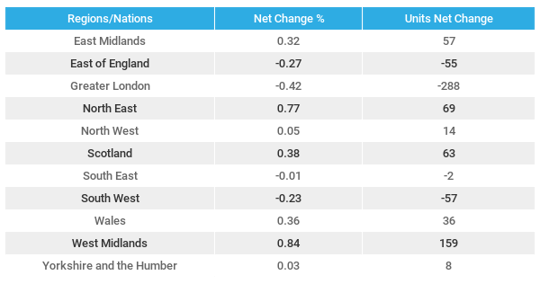 Table 6. Net change by location type for Independents across 2,700
in and out of town GB locations (Source: LDC)

“It is encouraging to see a reversal in fortunes of independent shops from a year ago with positive change, allbeit minute, yielding a net gain of just four shops across the country! Independents are a sensitive barometer of business confidence and thus their fortunes are worth tracking closely.

Of note is that the increases come from within the convenience sector and specialist food retailing in particular along with the continued growth of health and beauty outlets for both men and women – the good news is not limited to just one subsector.

As ever the devil is in the detail and regional variations abound, with decline visible in London but with increases evident in the West Midlands and a reversal of fortunes for independent ‘shops’ in Scotland. Contrary to popular belief the high street is alive and well with independents, and, H1 2016 saw a tenfold increase in net openings from a year ago. This sector continues to provide a key element of stability to our towns in particular."

"I am pleased we can see in our results a glimmer of growth in independents on our high streets, and equally that progress is reflected across a range of sectors.

It’s encouraging to see a growing vigour in independent retailers across the UK. It’s becoming increasingly clear that the customer both needs and wants to be present when shopping for some items, as well as having online options, and that this will hopefully have a positive impact on independent shops.

I am worried about the Greater London region, which has seen the worst regional fall in openings in the first half of 2016, coupled with the recent news about higher business rate hits and rental values increasing. It is certainly a tough time for independent retailers in Greater London as well as some other parts of the country.

These results do however, give us a few good examples of how independent retailers are thriving. Particularly in the West Midlands region which is a growing industrial powerhouse where people have more money to spend, which in turn is resulting in more independent shops thriving."

On September 14th 2017, we held our 16th Retail & Leisure Summit where we launched our NEW Footfall Heatmap and released data on the latest trends of ...