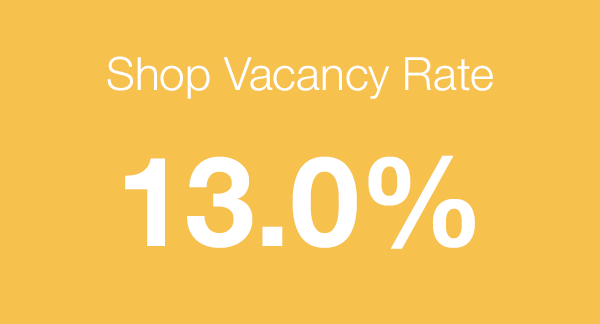 The picture across Great Britain. Britain’s vacancy rate remains at 13.0% in April from a rate of 13.0% in March. The overall retail and leisure vacancy rate has also remained the same at 11.6%. 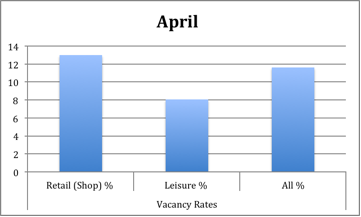 Matthew Hopkinson comments:
“Nothing of note to report in April with regards vacancy rates except ‘steady as she goes’. An ongoing trend which is encouraging is that we are continuing to see retail and leisure premises that have been vacant being demolished, redeveloped or having a change of use. Over 60 premsies were changed in this way during April – small to the overall stock but shows proactive place management in my view.

A report published this week for the Independent shows that it is still a challenging task to reduce vacancy rates as the Phones4U portfolio of shops shows with 60% still lying empty in April. A question for the future based on what we have seen happen to date is – what is the new norm for locations when it comes to vacancy rates and if high then what is an acceptable level post possible intervention?”

The picture across Great Britain. Britain’s shop vacancy falls to 13.0% in March from a rate of 13.1% in February. The overall retail and leisure ...

How do you relate to the digital natives of the world?

As ever it is great to have the opportunity to listen to views on what is happening in the UK retail and leisure sectors and last week was no ...

10 Key Findings from the Convenience Stores: The Inconvenient Truth Report

For those who haven't downloaded our latest report Convenience Stores Report "The Inconvenient Truth" we have put together a summary of the key ...

Following the announcement that M&S are due to close 30 of their larger stores selling fashion and homeware products to focus on their food offering, ...